At end of June, the Gold Coast of Australia hosted two separate G-2 level international taekwondo tournaments, and Ara White from U.S. Best earned a medal at each one. While winning even one G-2 medal is difficult enough, Ara showed great perseverance across the course of multiple days to achieve two.

First, at the Oceania President’s Cup, Ara won silver. She picked up a bronze a few days later at the Australian Open. 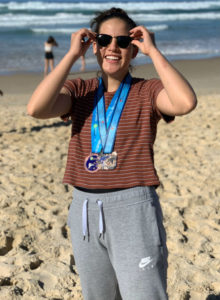 Enjoying some rest after tournaments